skip to main | skip to sidebar

Sorry I haven't been blogging as much as I should. I've been awfully busy watching my first place team dominate the National League. And until Allen and Ginter came out, I just haven't had much to collect. But now that it's out, IT IS ON! I've already bought 2 hobby boxes, a blaster, some loose packs and am definitely making progress at finishing the base set. I also bought about 20 relics on eBay for a total of about $25. Thank you combined shipping. Not to mention I got to land a Mat Latos (future Cy Young winner) relic card!

The crowning achievement of my Check Out My Cards buying spree was this: a 1996 Trevor Hoffman Leaf Signature autograph. My first Trevor autograph. It doesn't seem like Trevor signs very much as he doesn't have much available on the market, and the ones that are out there are very expensive. This card is beautiful and shows off his trademark windup. As we all know, Trevor was one of the greatest Padres in history. I was sad when he left, but let's face it, it was time as the Padres had Heath Bell ready to take over. When he retires, he will always be loved by San Diegans and Padres fans. I can't wait to see him inducted into the Hall of Fame.

This autograph is on card and wonderful. One of the focal points of my collection now. He is also a member of the 1998 Padres team, so this card represents another check on my checklist of 98 Pads. 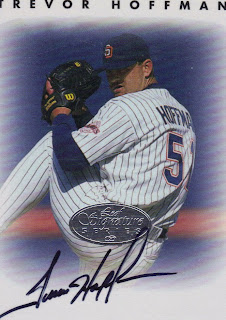 Like Dave Winfield, Ozzie Smith just looks better in Padres colors. While I like Ozzie, I don't think he was a very deserving Hall of Famer. He was a mediocre hitter that made highlight reel plays in the field. He is basically a Web Gem HOF'er. Regardless, I love having cards of him in the Padres uni. My childhood was full of watching Garry Templeton who we got in the trade for Ozzie. Garry hit better, and made his fair share of great plays for the Pads. I loved hearing Jerry Coleman announce the great Oh Doctor plays made by "Tempy". Garry is still around managing various Golden Baseball League teams around California.

This card is good looking, and is numbered to 145. It is purple because it is a variation I think. Anyways, it will look great in the display case. 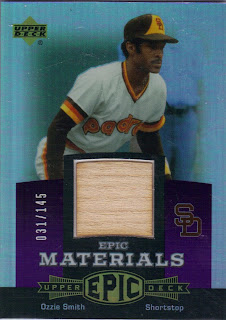 Posted by Padretonian at 10:00 AM No comments:

As part of my effort to collect autographs of the 1998 Padres, I got this Joey Hamilton autograph from the 1996 Leaf Signature set. It was only $1. Joey was a key part of the Padres rotation for 4 years or so. He was one of our first round picks that worked out during those days, and was one of the top prospects in baseball. He was a key part of the Padres rotation in the 1998 season, and got a great number of strikeouts. He gradually gained weight, and was traded after the World Series season for Woody Williams, which worked out great for the Padres.

Joey was the start of the Padres distaste for Scott Boras, as he held out after the draft. Joe McIllvaine said he would have never drafted him if he knew he was represented by Boras (how did he not know?!?!?!).

I've now got 3 of the 5 starters from 1998, although I suspect Kevin Brown in a Padres uniform is going to be tough to track down. 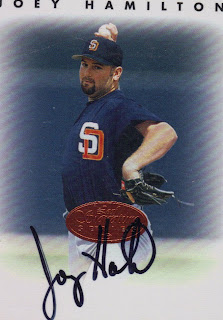 I love that this set is so cheap, and that the autographs are on card.
Posted by Padretonian at 9:00 AM No comments:

I was never thrilled when David Wells pitched for the Padres. Sometimes he'd barely get the job done, other times he'd get drilled. Regardless, he was a great personality that was a native of the area. I still love hearing him go on Scott and BR and give his take on things. I think radio is his real calling at this point, he would be fantastic if given a show. I also think David Wells needs to be given recognition for the great job he did getting injured after falling off an OB barstool. While I may not have loved his pitching, I loved him as a person.

This 2007 Fleer Ultra dual jersey card of David Wells numbered to 160 looks fantastic and really shows off his corpulence. I'm sad Fleer went the way of the dodo, as I was a fan of this 2007 Ultra release. Oh well. 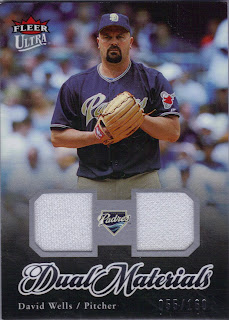 Publish Post
Posted by Padretonian at 9:00 AM No comments:

During the Padres darker days in the early 2000's, Brian Lawrence was one of my favorite players on the team. B-Law had a rubber arm, threw a sinker that got a lot of ground balls, and was an all-around good guy. Thinking back to that period, I think B-Law anchored the rotation for a while. He wasn't anything exciting, and didn't throw hard, but he got the job done. While that time was pretty miserable for Padres fans, it was good to see players that cared and played well. Lawrence eventually ran into some arm problems, was traded to the Nationals for Vinny Castilla, was released, played for Phil Nevin in the Golden Baseball League, was picked up by the Padres last season and then released, and he's now playing AAA in the Marlins organization. I wish him the best as he works his way back to the Majors. Always underappreciated, but always a good guy. 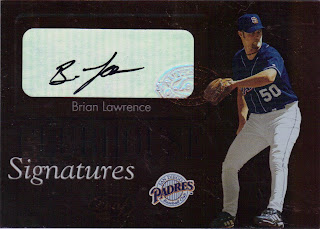 It's a shame it's a sticker auto, but it's nice nonetheless. Good to see some non-marquee Padres get recognized in sets with autographs.
Posted by Padretonian at 9:00 AM No comments:

So my return to collecting started with my attempts to complete the master set of 2009 Goudey. As not many people seem to be collecting this, I am struggling to find the last few cards I need. Luckily, checkoutmycards.com had a few I needed for a low price. Scratch the Sport Royalty Stan Musial and Guy LaFleur off my need list! 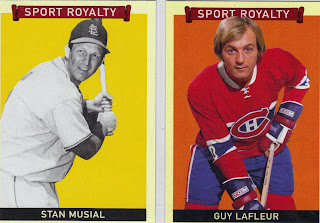 Now I just need these still:


Check out my trade list on the right if you have anything I need! You can also check my photobucket for my other cards for trade!
Posted by Padretonian at 12:11 PM No comments:

E-mail Me for trades!

See my collection of cards for trade!!